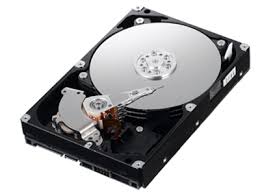 OK, you may be wondering what I'm talking about. What's an Exbibyte? Who cares, right? Forgive me, but I just couldn't help myself. As an MIT graduate, I feel like I should know something about these terms. Allow me to briefly talk about the exbibyte (EB), gigabyte (GB), terabyte (TB), and zettabyte (ZB). I won't even get into megabyte (MB) or kilobyte (KB) in this discussion.

I got onto this topic as I was looking at the maximum file size under different file systems for your computer. When you go to format a hard drive, you can typically choose between FAT 32 and NTFS. Why would you choose one over the other? One of the reasons for me is this: maximum file size.
So how big is an exbibyte?

Let's look at this another way. A terabyte (TB) is roughly 1,000 gigabytes (GB). We now see hard drives advertised as 1 TB hard drives.

While we're on this topic, let me also through out another term: zettabyte. Now, does that sound bigger or smaller than an exbibyte?

Where's the limit?
Posted by Unknown at 6:43 AM