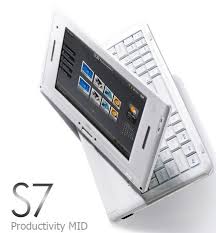 So, Viliv is a small company that is starting to create some novel computers that are really small. The S7 has a 7" touch screen and it's a bit smaller than the Fujitsu P series, so I can't speak for its keyboard. When the keyboard gets too small, it becomes too difficult to use. For example, the Sony Vaio P series is probably too small for most people. Of course, Sony was targeting women with the Vaio P and I suppose that makes sense since most women have smaller fingers compared to men. This is especially true if you're talking about Asian women.

Viliv is a Korean company and I think it has potential if they create products that are high in quality. Earlier this year, they launched the S5 and the X70.
Posted by Unknown at 4:58 PM