May 20 saw the release of the next (and possibly final) release of Apple's Mac OSX--titled Lion or 10.7 if you're going by the number designation. It was announced way back in June at WWDC and was billed as the merging of OSX and iOS. Essentially all the new features were announced back then and they heavily leaned on importing features/functions native to iOS to the desktop/laptop experience. I've only gotten little over a day to play with the new OS so this is by no means meant to be a full review and I will not cover every feature, but it should give you a very good idea of what to expect if you upgrade and, perhaps, reason to do or not to do so.

INSTALLATION
I'm starting with this (rather boring) part because so much attention has been paid to the unique way in which Apple is distributing the product initially: only via the Mac App Store. That being said, this update is only possible from Snow Leopard so no luck if you haven't updated to that in the last couple of years. Lion is very nicely priced at $29.99 (good for all your computers, too) and is a ~4.5 gb download, though you need around 7 gb to install. It took me a solid couple of hours to download at home, but this was shortly after work when many other Macophiles had also rushed home to download the OS and I'm sure the servers were a little taxed. Installation was, by far, the easiest of an OS I've ever encountered. Once downloaded, it took about 15 minutes and I barely had to press a button. Easy. Between this, no optical drive on the MacBook Air and on the new MacMini, Apple seems to be waging a full-scale war with physical media. Judging by their most recent earning reports, they seem to be winning.
GENERAL DESIGN
That said, if you left for awhile as this installed and came back after everything was done, you may not have even thought anything happened. It essentially looks exactly like Snow Leopard. Your only real clue is the addition of the new Launchpad and Mission Control icons in your dock. This reiterates an overarching theme with Lion, it is definitely an evolutionary upgrade and not something that is going to change computing forever.
NEW FEATURES
Mission Control: Mission Control (top picture) is one of the hallmark new features of Lion. It essentially combines and replaces Expose and Spaces. So far, in my limited use of the feature, I'm a big fan. It consolidates two nice features that I really liked and conserves a valuable 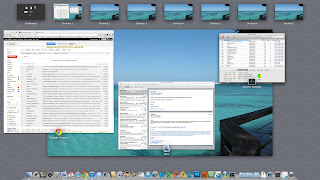 multitouch gesture (more on these later). It looks to make using more virtual desktops an easier process.
Launchpad: Launchpad (bottom picture) is very iOS-esque. By clicking the button on the dock or using a multitouch gesture or hotkey, the 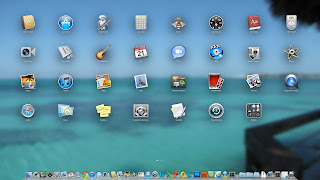 Dr. Riley Alexander is a pathology resident at Indiana University School of Medicine, blog "addict" and avid follower of technology. His primary interests revolve around how technology, especially mobile, will create increased efficiency, enhanced physician education and better delivery of care in the medical field. Dr. Alexander is a graduate of Indiana University School of Medicine with a combined MD/MBA, in partnership with IU's Kelley School of Business. Due to this, he is also very interested in management, healthcare policy and non-clinical aspects of the medical field and enjoys exploring non-clinical opportunities for medical students, residents and physicians. He completed his undergraduate education at IU-Bloomington.
Posted by DrJosephKim at 8:11 AM