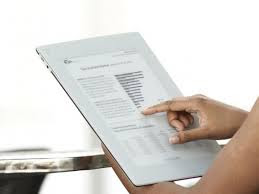 According to the editors at PC World, the Plastic Logic Que was one of the "Best of CES 2010." Here's how they describe it:


E-readers were one of the hottest categories of the show this year, and the most compelling new model we've seen is the Plastic Logic Que. This 10.7-inch reader sports a capacitive-touch display that lets you gesture through page turns; it also downloads books from Barnes & Noble's e-book store. It will be available in April in a 4GB Wi-Fi version for $649, and an 8GB version with Wi-Fi and 3G for $799.


I'm not particularly excited about e-readers because I'm already a tablet user. I can read books on my tablets. So, why invest in a dedicated e-reader when I already have a device that does that already?
Posted by Unknown at 9:17 AM