Will every doctor carry an iPad in the hospital? 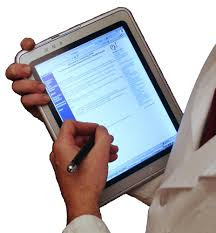 Imagine a medical television show where every doctor carries an Apple iPad around the hospital. When Apple launched the Newton MessagePad many years ago, that's probably the image they were dreaming about. However, the MessagePad was too expensive and there weren't enough doctors who were willing to adopt that type of advanced technology in the clinical setting.

Times have changed. Many doctors are now using devices like the iPhone or iPod touch. Soon, we'll see them carrying iPads everywhere so that they can access all the digital information in the hospital. I'm talking about telemetry reports, electronic health records, computerized physician order entry, and more.

The Apple iPad isn't the only slate computing device that's out there, but it's emerged as one of the first. So, if the iPad sees the type of success that the iPod has seen in the MP3 market, then I can easily envision that every doctor out there may be walking around the hospital with an iPad (or a similar device) in the white coat pocket.