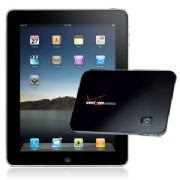 Before Verizon Wireless gets the Apple iPhone, it's getting the Apple iPad. Actually, it's not really a Verizon iPad. It's a combined deal where you can buy the iPad (Wi-Fi only) with a small Wi-Fi hub (mobile hotspot) called the MiFi. So, Apple isn't really making a new iPad that's compatible with the CDMA network on Verizon. This is a combo deal that includes a regular iPad that you can buy now from the Apple store plus a Verizon MiFi (which you can also buy right now) so that you can get online anywhere.

I guess this is good for all those Android users who don't want to switch to an iPhone but who might be looking for a nice slate. When I travel, I'm seeing more iPads and less netbooks. I wonder when netbooks will reach the point of extinction as they get replaced by thin and light slates like the iPad.

If you buy an iPad and MiFi bundle from Verizon, though, you will only pay $50/month (which is $10 less than a standard MiFi plan). Also, the MiFi doesn't require a two-year commitment. You can get away with a rolling monthly service, with no termination fees. Maybe this is my chance to get a MiFi that has no long-term commitment.
Posted by Unknown at 6:07 PM