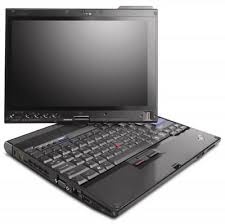 The Lenovo Thinkpad X200 Tablet PC is not a new machine. However, the folks over at MobileTechReview have recently given it a nice review. The editors gave it 5 stars (out of 5 stars). I guess you can't get any better than that.

Here are some of the highlights from their review:
I love my Thinkpad X200 Tablet PC. It's the best laptop/tablet I've ever owned (and I've had my share of computers over the years). I have the multi-touch screen that includes an active digitizer (Wacom penabled digitizer pen) that allows me to "float" the pen over the screen to move the cursor. I also have the touch-based screen that allows me to use my finger to tap on the screen and use the on-screen mouse feature on Vista and Windows 7. Some people seem to really hate the on-screen mouse pointer, but I personally really like it.
Posted by Unknown at 6:44 AM