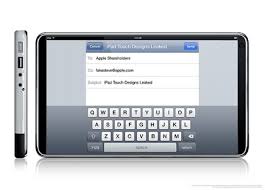 I hate to be spreading rumors that may be false, but I can't help myself. According to the folks at Brighthand, the Apple tablet may be larger than what we may be expecting. Of course, since these rumors are being generated in Asia, I would take them with a grain of salt because you never know what could get lost in translation.
OK, so the latest is this:
Here are my thoughts: the 13 and 15 inch screen sizes are equal to the screen sizes found on the MacBook Pro series. Are we sure we're not just looking at some screens for the MacBook Pro? I think Apple is more likely to release a smaller tablet so the can compete against low-priced netbooks.

Also, OS X on the Apple tablet? If Apple releases one that is large enough, perhaps it will run both OS X and the iPod touch / iPhone OS. The fall is approaching quickly and I hope we see something come out soon so that I can justify a trip to the Apple store. If this thing ends up simply being a giant iPod touch, then I'll pass.
Posted by Unknown at 3:03 AM