I really wish the iPad came with a digital pen (stylus) 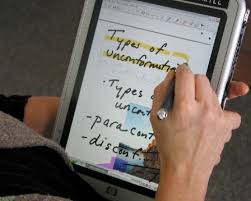 I wish the iPad came with a pen. It would be the perfect gadget for jotting notes during a meeting. I would love to trade my Samsung Q1 Ultra for an iPad if the iPad screen included an active Wacom-enabled (penabled) digitizer that allows one to use a stylus pen and "write" on the screen. I've been a huge fan of "inking" and that really began with the old Apple Newton Messagepad series.

So, will Apple eventually release an iPad that includes a stylus pen? At that point, it would really be a tablet and it wouldn't be a pad anymore. Maybe Apple plans to use the name iTablet in the future for a new device that will incorporate a robust operating system, an active digitizer, and all the other missing features that are not currently found on the iPad (like a USB port, an SD slot, a webcam, a kickstand, a removable battery, a video port, and more...)
Posted by Unknown at 9:38 PM