I now have my hands on the HP ElitePad 900 and the HP ElitePad Expansion Jacket that includes a removable built-in battery. The ElitePad runs Windows 8, an enterprise-level operating system that will allow you to run all your native EHRs and CPOE applications that you normally run on your standard PC. Windows 8 will also let you run some mobile apps.

Since you can't play around with an ElitePad at Staples or Best Buy, I thought I'd start by posting some photos that show the size of the device compared to the Apple iPad 3.

Here's a photo comparing the sizes of these 2 tablets and you'll see that they have very similar overall dimensions:

The ElitePad is one of the thinnest Windows 8 tablets I've seen. At 9.2 mm, it's actually barely thinner than the iPad (9.4 mm). Here's a photo showing the ElitePad right on top of an iPad 3. I made a sandwich using both devices. The black bar below represents the ElitePad and the iPad is on top:

The iPad has a 9.7" display while the ElitePad has a 10.1" display. Here is a picture showing the  iPad 3 (on the Left) with the widescreen ElitePad (on the Right):

To make sure you're paying attention, I flipped them around this time. So, the next photo shows them in portrait mode (HP on the Left, iPad on the Right): 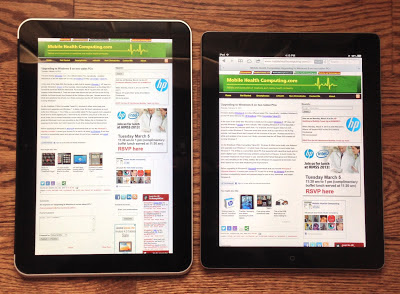 Initial impressions so far: the ElitePad is fast, but not super-fast. Remember that it uses an Intel Atom-based dual-core processor, and that allows it to have great battery life. It's much faster compared to first generation Windows 7 tablets like the HP Slate 500 or other similar tablet PCs that were powered with earlier Atom processor.

Windows 8 runs very smoothly and it's nice to run standard applications like Microsoft Office, Adobe Photoshop, and others. If you're an iPad owner using Remote Desktop or Virtual Desktop apps to access your Windows PC, you'll appreciate the fact that you can have a fully functional Windows machine in the form factor of a thin and light tablet.

I'll be posting additional thoughts as I show how the HP ElitePad Expansion Jacket works, so stay tuned for more.