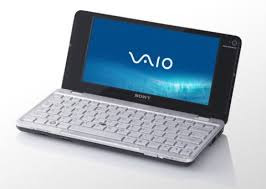 The Sony Vaio P is a tiny little computer. I can't call it a netbook. Sony won't like that. It's generally priced at $849 (less if you get a refurbished model from the Sony Outlet), but it may appear on Verizon Wireless for $299 if you commit to a 2-year contract with a data plan.

What do I think about the Vaio P? I think it's a great little computer if you like tiny font on a small screen and you don't need long battery life. I've had several computers made by Sony and I'd buy another Sony, but I won't pay retail for a Sony. I enjoy playing with gadgets at the retail Sony store, but you won't find me walking out of that place with a bag in my hand.
Posted by Unknown at 12:29 AM