After a few days with the HP EliteBook 2740p 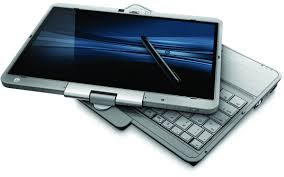 After using the HP EliteBook 2740p for a few days, I've come to conclude that this is a really great option for physicians and other health care professionals who want a light, but robust convertible tablet PC. I really appreciate the size and weight of the EliteBook. Although the ThinkPad X200 tablet PC is a popular choice among many professionals, I still find that the ThinkPad is too bulky and heavy (especially when you use the extended battery). The HP 2740p is refreshingly lighter and thinner. For me, the pop-out LED light found on the 2740p is a life-saving feature since I often work at night.

So, if you're looking for something that is powerful, versatile, thin, and light, then you should explore the HP EliteBook 2740p tablet PC. I prefer the keyboard on the ThinkPad over the keyboard found on the HP, but I'd rather have the weight and the size found on the 2740p. If you want something thinner and lighter, then you'll need to settle for a device like the Apple iPad.
Posted by Unknown at 8:35 PM