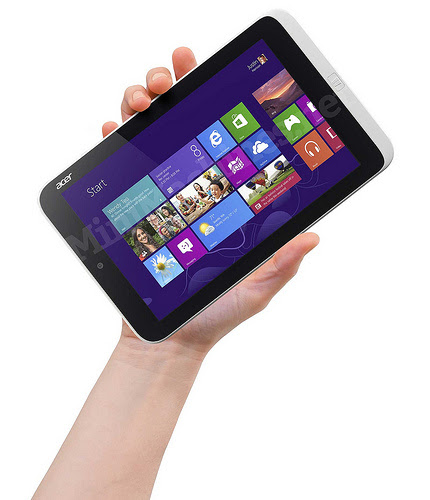 At a fast glance, it may resemble an iPad mini. It weighs 1.10 pounds. You can easily hold it in one hand. It's 0.45 inches thick and the 8.1" screen has a resolution of 1280 x 800. This tablet is rated for approximately 8 hrs of battery life because it's powered by a dual-core Intel Atom processor.

Will this device feel like a netbook when you use it with an external keyboard? Remember that most netbooks have an average display size that is 10" so the 8.1" display on the Iconia W3 will feel a bit smaller than a netbook. The flip side is that the external keyboard that you use with this type of device will probably have full-size keys. But, the keyboard sold by Acer does not include a built-in mouse pointer.

Rumors have it that most other major PC manufacturers will be releasing smaller Windows 8 tablets. Microsoft is rumored to be releasing a smaller Surface tablet. Will the screen be 7" or 8"? I suspect HP, Dell, Lenovo, Asus, and others will do something similar this summer.

I'm still waiting to see if the battery life claims of the new Intel Haswell Core processors will be true. 50% longer battery life on a Core i7 tablet sure would be nice.
Posted by DrJosephKim at 6:00 PM