Another reason why I want an illuminated keyboard 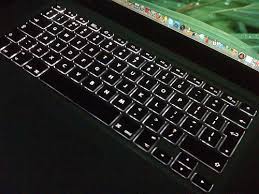 Many of you know that I now have a newborn at home. When I'm on baby duty, I try to do a little bit of computing on my laptop and when you're working in a dark room, you quickly recognize the value of an illuminated keyboard. Those that use a backlight are probably the best (as opposed to an LED shining light down on the keyboard).

If you're a radiologist, you probably know what I'm talking about. You may not do a ton of typing since you're probably dictating your notes, but a backlit keyboard can be a great thing to have. Apple recognizes this and that's why the backlit keyboard on the MacBook Pro is a standard feature. My wife has one of these and she doesn't need a USB-powered LED light. When will PC laptop manufacturers catch on? Only a few have added some type of illumination. I'm waiting until this becomes a relatively standard feature. The problem right now is that we don't have enough people asking for it.
Posted by Unknown at 3:27 AM