Will all future tablet PCs include multi-touch screens? 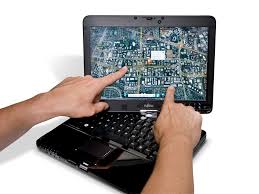 I think that all future touch-screen smartphones will include capacitive multi-touch screens. Will the same be true for tablet PCs? After all, I primarily use my Wacom digitizer when I'm using my tablet PC. Although it's capable of touch-based input, I don't use that very often since I'm a pen-based computing guy.

Will all future tablet PCs include a dual-input (some call this a dual digitizer) screen that will allow users to navigate using a pen as well as fingers? Are multi-touch features here to stay for tablet PCs? I'm still not entirely sure. Why? You see, capacitive multi-touch makes a lot of sense for smartphones that have small screens. I'm still not entirely convinced that they make sense for professional tablet PCs (I can definitely see their appeal for consumer-based tablet PCs).

Maybe the consumer market will drive tablet PC manufacturers to include multi-touch screens on all future tablets. Maybe the health care sector will only use tablets that include Wacom-based active digitizers that also include passive touch screens. After all, do you think you can use a capacitive touch screen if you're wearing hospital gloves? You can if you have a passive touch screen.
Posted by Unknown at 5:58 AM