A review of 3 tablet PCs and notebooks - Part 1

I'm posting Part 1 of my ongoing review of 3 different tablet PCs/notebooks. In this review, we'll look at some of my initial impressions as I test these 3 computers.

I've been using the ThinkPad for over a year and it's a solid machine. It's also the heaviest one in the group and it has the largest footprint, especially when you're using the extended battery. I've also had the HP EliteBook for quite some time and I've thoroughly tested the 2730p and the 2740p. 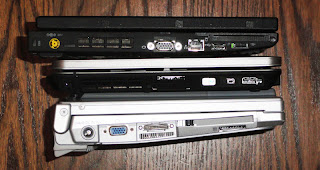 The Panasonic Toughbook T8 has the smallest footprint (and the smallest keyboard) and it's the lightest at 3.3 lbs. However, this notebook is actually the thickest one. You'll see that by looking at the photo above. The T8 is the one of the bottom. For a notebook that's only 3.3 lbs, the T8 is surprisingly thick. Then again, it's the only rugged PC out of the 3, so it's expected to be thicker if it's going to have that 1 foot drop rating.

The Panasonic T8 has a nice rubber hand grip that allows you to securely hold the laptop in one hand while you're typing or tapping on the screen with another.  This hand grip is designed really well and it turns flat when you place the laptop on a desk. The rubber hand grip is sanitizable (great for health care professionals). In fact, a number of disinfectant solutions have been tested on the entire line of Toughbook mobile computers.

The keyboard on the T8 is a bit smaller compared to all the others. I was able to get used to it quickly, but it's an adjustment if you're not accustomed to typing on a smaller keyboard.

All 3 laptops have 12" screens, but the Toughbook does not have a widescreen display. Instead, it uses the standard 1024 x 768 XGA resolution. Even though the T8 is not a convertible tablet, it has a passive touch-screen, which is a great feature if you're using an electronic health record (EHR) that's optimized for touch. If you need a Toughbook tablet PC, then take a look at the Toughbook C1.

The ThinkPad is 3.88 lbs when you're using the 8-cell extended battery. It also has the largest footprint, but it includes a full-size QWERTY keyboard. Many will argue that the keyboard on the ThinkPad is one of the best laptop keyboards in the industry. I just wish Lenovo would add an LED light to the keyboard on the tablet. The HP EliteBook has a pop-out LED light that I use all the time. The HP EliteBook 2740p is the thinnest convertible tablet out of the bunch. It starts at 3.8 lbs, so it's slightly lighter than the ThinkPad. 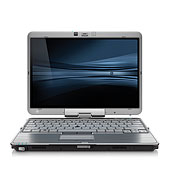 The 2740p is still thin after you add the docking station to the laptop. You can also get a thin "slice" battery for the 2740p and stay mobile all day (up to 10 hours) while you're using your laptop. The 2740p blends a capacitive multi-touch screen with an active digitizer. The newer ThinkPad X201 tablet also comes with this dual-input option.

This concludes Part 1 of my review. Stay tuned as I continue to write about these 3 different mobile computers.
Posted by Unknown at 6:32 AM