How do you define "multi-touch" on a tablet PC? 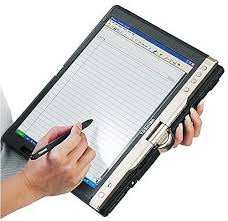 The term "multi-touch" monitor has different meanings to different people. At one time, multi-touch was used to refer to a tablet PC screen that could receive input in multiple ways: 1) a Wacom active digitizer that required a special stylus pen (allows you to hover over the screen); or 2) passive touch with a finger, plastic tip, or just about anything else.

Now, "multi-touch" seems to be used more for capacitive touch screens that allow a user to place several fingers on the screen and allow finger gestures to translate into commands. We see this type of technology on the Apple iPhone, the Palm Pre, and others. The HP TouchSmart tx2z tablet PC series also advertises that its screen is a "multitouch" screen:

This tablet PC is also "multitouch" : you can use more than one finger (e.g., index and thumb) at the same time.

Windows 7 is supposed to incorporate some of this type of multi-touch technology on tablets that have capacitive touch screens. With these types of screens, a plain plastic stylus won't work.

So, how do you define "multi-touch"? It's starting to get confusing out there.
Posted by Unknown at 3:36 AM