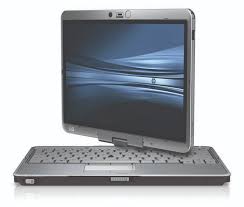 I want to thank those at HP who allowed me to borrow an EliteBook 2730p Tablet PC. I enjoyed reviewing this tablet and comparing it to my current Lenovo Thinkpad X200 Tablet PC. As Windows 7 comes out and incorporates multi-touch gestures into its operating system, we will see more tablets appearing with capacitive touch screens that allow for multi-touch gestures. I admit that I'm not too excited about multi-touch features on a tablet PC. I think multi-touch is a great features on smartphones and PDAs, but not on a tablet when I'm mainly using a pen.

I'm eager to see how HP will update and refresh the EliteBook 2730p tablet PC. Will they offer one that has a multi-touch screen? (I'm sure they will) What else will they change on this nice tablet? Perhaps an illuminated keyboard instead of a pop-up LED light that shines down on the keyboard? Maybe a 2.5" hard drive instead of a 1.8" drive?
Posted by Unknown at 4:51 AM