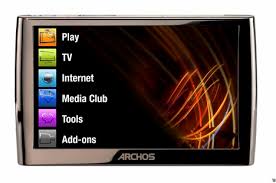 I'm excited about the upcoming Archos 9, but the Archos 5 appears to be a great little mobile device that you can easily slip in your pocket. Unlike the OQO model 02, the Archos 5 is very thin.

Archos has confused consumers by using the name "Archos 5" to refer to two different products:
Confused? They both have the word "Internet" and "tablet" in their names, so I agree that it's a bit confusing. The media tablet is a fancy media player that also includes a web browser. The Internet tablet includes some of the features found on the media tablet but it also runs Google Android and it has an internal GPS. So, the Internet Tablet is more like a mini computer. Would it be more clear to use the common phrase Mobile Internet Device (MID)? Archos likes to be different.

Now, some may argue that it doesn't make sense to purchase an Internet Tablet if you already use a smartphone. That's a reasonable argument. However, I have a smartphone and I also have an iPod touch. Some may say that the iPod touch is a media tablet. Others may call it an Internet tablet. I suppose if Apple releases a tablet some day, then things could start to get really interesting. However, until we see that happen, we're really talking about devices that are being defined by their screen sizes and storage capacities. Do you have a smartphone that has a 5" screen? Would you want to use a smartphone if it had a 5" screen?
Posted by Unknown at 3:08 AM