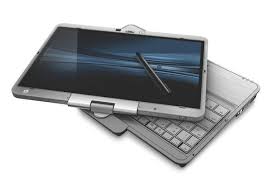 If you're thinking about buying the HP EliteBook 2740p convertible tablet PC, go for it! This is a great little tablet that takes all the features from the 2730p and makes it better. What's changed from the 2730p to the 2740p?  HP has made some significant improvements to both the inside and outside of this convertible tablet PC. Here are a few things that I've noticed so far:
Like the 2730p, the 2740p uses a 1.8" SATA hard drive, so this makes the device very thin and light. That's one of the main reasons why I like the HP EliteBook over the ThinkPad tablet. The EliteBook is much smaller compared to my Lenovo ThinkPad X200 tablet PC.  Plus, the HP includes the LED light to illuminate the keyboard so that I can see what I'm typing when I'm composing my blog posts.

You can expect several additional posts about this tablet as I spend more time with the HP EliteBook 2740p convertible tablet PC. My first impressions are very positive and the only major drawback that I'm finding at this point is the fact that the keyboard is not as nice as the keyboard found on the ThinkPad.
Posted by Unknown at 11:24 PM