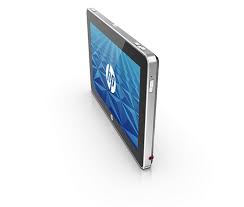 With all the buzz and excitement surrounding the iPad, when's HP releasing the Slate?

It looks like HP has finally released the specs for the Slate. It will have an 8.9" capacitive multi-touch display, it will run Windows 7, it will have an SD card slot, it will have a USB 2.0 port, and it will have cameras on the front and back of the device. With a 1.6GHz Atom Z530 processor and 1 GB of RAM, it won't be a